The follow-up Alumni project on the successful civic campaign “Just Another Day” (2020), has gone through several changes in project activities and the method of implementation. EDVACAY Alumni Hana Sarajlić and Vanna Ćurin decided to keep the same topic in its core, armed with the knowledge they acquired while working on the documentary “Just Another Day” on the negative effects of social isolation on members of marginalized social groups, such as people with mental disorders, LGBTQI+ people, and people with development disabilities, and decided to now have a broader social group as a target group of their project – all people who experienced the feeling of isolation, loneliness, and insufficient support as a result of the pandemic.

They decided to change their approach and reached out to Aida Hasović, a teacher in the Elementary School “Hrasno” in Sarajevo with an idea to engage young students in writing essays on the topic effects of pandemic isolation. Ms Hasović has approached the school director with the idea and received full support. With the support from Ms Hasović, Hana and Vanna have drafted an official call for submission of essays on the topic “Isolation during the
Pandemic: the good and the bad that it has brought me” and sent it out to all elementary school in Sarajevo Canton. The competition was open to all primary school students in Sarajevo, from sixth to eighth grade. The essays were to be submitted with consent filled out by a parent or a guardian agreeing to publish the paper under a code on the project website, without revealing the identity of the author.

Considering the importance of the educational system in promoting and encouraging written word, but also verbalizing and expressing feelings, thoughts and doubts of students in situations of crisis, our Alumni fellows believe that the participation of young students greatly contributed to project’s goals and to their personal reflection process. Hana and Vanna have awarded the best three essays and have invited young authors, their teachers and parents for a small award ceremony.

How does trans-locality affect the integration of young Bosnians and Herzegovinians into Western European societies? 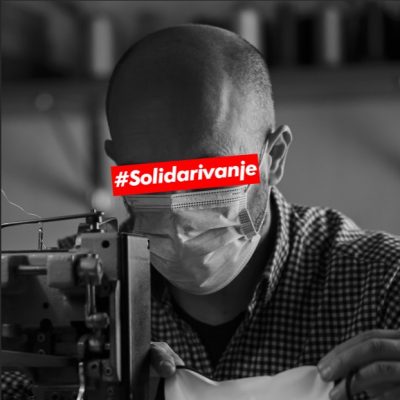 The “Solidarivanje” project led honors the essential workers who risked their lives in the times of the coronavirus pandemic in BiH through promotional materials like artistic posters, which will be displayed in the busiest places in Sarajevo.