Poland promotes itself internationally as “the meeting place’’ of different cultures, due to its tightly intertwined Polish, German, and Jewish past. At present, however, it grapples with a dramatically rising wave of nationalism, Antisemitism, xenophobia, and social exclusion. Jewish cemeteries are repeatedly vandalized; Antisemitic, racist, and nationalist graffiti are common sights on buildings. It is not widely known by the inhabitants of Lower Silesia, Opolskie, and Mazovian Voivodeships that before World War II, their cities were the most prominent centers of Polish German-Jewish life and afterwards housed the biggest Polish community of Holocaust survivors who wanted to rebuild Jewish life in Poland.

Senior Fellows Jan Kirschenbaum, Dominika Burakiewicz, Ioannis Stylianidis, Bethanie Martin, Maciej Kirschenbaum, and project partner Aleksandra Wilczura, the President of the Cukunft Jewish Association, planned to implement a project aimed at restoring the presence of the Jews of these regions in the collective memory. The team also aimed to combat stereotypes and preconceived notions of Jews by exposing them to contemporary Jewish communities of these regions. Together with a wide range of partners, the project employed methods of informal education on national diversity in context of the Jewish community & preventing Antisemitism in Polish society. It included lectures, workshops, murals of Polish German-Jewish sports clubs, and a football tournament for children.

The team aimed to combat stereotypes and preconceived notions of Jews by exposing them to contemporary Jewish communities of these regions.

The idea of the first part of the project “KICK FOR EUROPE – Football in Poland and Germany – a European journey through time” was to bring Polish, German, and Jewish youth and their national organizations together and integrate them through workshops, lectures, and games devoted to the sport.

The event took place between September 23 and 27, 2019, when 20 teenagers from Rostock (Germany) and Warsaw (Poland) participated in educational activities at the Jewish Community Centre – JCC Warsaw, Polin Museum, and the PGN Polish National Stadium next to the Vistula River. The activities for students were devoted to former and contemporary Polish and Jewish life in Poland, as well as Polish German-Jewish history from the perspective of sport. Jan and Aleksandra didn’t forget about integration activities and games, such as learning basic phrases in the Polish and German languages and sightseeing at Warsaw stadiums and monuments with a guide. At the end of the seminar, Polish and German youth created a poster presenting their vision of future Polish-German relations. Students presented the poster at a closing session that took place on the Mississippi Boat in front of three special guests from the Warsaw Jewish Community (i.e. President WJC-Leszek Piszewski), Cukunft Jewish Association, Klamra Foundation, the German embassy in Poland, the German Ministry of Foreign Affairs, Allianz Kulturstiftung and TUI Stiftung.

From January 4-5, 2020, the Cukunft Jewish Association organized the 3rd Lower Silesian Festival of Jewish Culture in Walbrzych, Poland. The event included numerous lectures and workshops on local Jewish history and culture, stereotypes, Antisemitism, and the Holocaust from the perspective of local multicultural history, Israel, heritage, and society. The idea behind this part of the project was to introduce local Polish Jews and their contemporary culture, traditions, and heritage to their Polish neighbors. Jan wanted to create an open, safe, friendly, and inclusive space for their integration, exchange of opinions, family stories, and even stereotypes. He wanted the people who participated in the event – Jews and Poles – to simply talk while they painted traditional plates for Jewish holidays, designed their own ecological Jewish bags, made their own Havdalah candles for commemorating the end of Sabbath, sang along with Chassidic songs – nigguns and other traditional Jewish and Polish songs, cooked and ate Jewish food and drank different type of kosher wine, or just experienced various Jewish rituals for Sabbath and Havdalah.

On one hand, the goal was to teach about local German-Polish-Jewish history and heritage informally, but on the other hand, they also wanted to present the local contemporary Jewish- Polish-German coexistence: “live, here and now” as a place for new design, vegetarianism and veganism in Jewish cuisine, ecology, and wellbeing. They wanted to show that 90% of Jews in the world are the same as Poles – they don’t wear religious cloths and aren’t visibly religious. They listen to the same music, read the same books, eat the same food. Jan and his team wanted to show the human face of the Jew, especially Polish Jew living locally at the corner, who is dehumanized in Polish stereotypes. Jan and Aleksandra believe that they achieved their goals by reaching many people from different age groups, who will pass their good impressions regarding Jews they met to others. The next part of the project was lectures and workshops on Jewish culture, history, and local Polish German-Jewish heritage in schools (Zary, Swidnica, Wroclaw or Walbrzych). With two secondary schools in Walbrzych, Jan and Aleksandra planned a two day “Jewish Festival at School” with lectures, workshops, distribution of Yellow Daffodils for celebration of the anniversary of the Warsaw Ghetto Uprising (19 April 2020), a Jewish mural, and cleaning a Jewish cemetery on April 16-17, 2020.

Jan and Aleksandra believe that they achieved their goals by reaching many people from different age groups who will pass their good impressions regarding Jews they met to others.

Due to the COVID-19 pandemic, they decided to carry this out online via Zoom. They organized three meetings in a formula of Online Seders – Dinners as a part of Passover (April 8-9) and Jewish New Year-Rosh Hashanah 5781 (September 19). Meetings were led in Polish and English and were open to public to those who registered in advance.

Their idea was to involve participants in creating educational content of these meetings to engage and motivate the participants to search for new ways of Jewish expression – in culture, religion, music, photography, storytelling, social work, local architecture, and sepulchral cemetery art relating to the slavery, Exodus, and Jewish leadership. Unfortunately, because of the pandemic and restrictions introduced by the Polish Ministry of Health in the middle of June 2020, they were not allowed to implement this project as scheduled. They first postponed it to August 2020, and later to September 2020.

With the German Educational Society as their project partner, Jan and Aleksandra organized a “Mini-Fussballiada 2020 – Ernst Wilimowski Football Tournament for Children from Autochthons and National Minorities” for sports clubs willing to participate despite the pandemic. The one-day tournament was organized in a sparring form at a stadium in Chrzastowice, Poland on September 19, 2020 for five teams: MIRO Chronstau (German Minority), FC Roma Zabrze (Roma minority), Akademia Otmęt, Makabi Warszawa+Hasmonea Wrocław (Jewish Minority) and MIRO Deutsche Fussballschule Gross Stanisch-Staniszcze Wielkie (German Minority). At the end only four participated because of COVID-19.

The Mini-Fussballiada 2020 Tournament for Children from National Minorities had the following rules: every team played with every team, no saving of results, no final classification, no judges, a lot of goals, socio-cultural integration, relaxed fair-play atmosphere, and healthy competition.

The last part of the project was the anti-discrimination workshops based on local Jewish history and heritage of Gogolin and Opolskie Voivoid, organized in cooperation with the German Educational Society and Klamra Foundation. They planned to paint a historical mural of Leopold Cassirer with children from national minorities and local schools in Gogolin.

Leopold Cassirer (August 28, 1847- January 27, 1922) was a German-Jewish industrialist, social activist and philanthropist from Gogolin, and one of the main founders of the local lime industry. Throughout his life, Leopold Cassirer supported the inhabitants of Gogolin, regardless of their religion or nationality. He was a benefactor for whom Germans, Poles, and Jews were equal.

Leopold Cassirer was a German-Jewish industrialist, social activist and philanthropist from Gogolin.

Taking under consideration all that Leopold Cassirer did for the local society as a German Jew, they decided, with the German Educational Society, to apply to the Gogolin city authorities to commemorate him and his work in Gogolin by naming a local city park by his name, because they believed that Leopold Cassirer’s social activism was an excellent example of the strength of the local community and the beauty of its multicultural heritage, which build social dialogue for the common good of all residents.

Jan and Aleksandra wanted to make a local educational and socio-cultural event open to the public with anti-discrimination workshops for children, mural painting, and organizing an open meeting with local Catholic priest, Protestant pastor, and a Rabbi (or representatives of the Jewish community) celebrating a new name of the local city park in Gogolin and dedicating it to Leopold Cassirer.

The local authorities, schools, and entrepreneurs who own the wall on which the mural was to be painted were invited. The Historical Mural of Leopold Cassirer was designed in cooperation with Dariusz Paczkowski from the Klamra Foundation, a well-known Polish street-artist and social activist. His design was based on Andy Warhol’s work – fresh, colorful and vivid – to better introduce Leopold Cassiser’s social activism to the local society.

Mural painting, anti-discrimination workshops for children based on the local history, heritage, and the figure of Leopold Cassirer, and the celebration for the the park’s new name have been postponed due to COVID-19.

This project was one of the winners of the 2019 Humanity in Action Grant Competition: “Addressing Antisemitism in Germany, Poland, Ukraine, the US and online.”

The Cukunft’s 2019 EVZ-HIA Competition Project was appreciated by the BRaVE International group of experts and nominated to the 2020 BRaVE Fair Awards for the most innovative projects that successfully respond to violent extremism and polarization in Europe. In September 2020, the Cukunft’s project was selected as one of the top 10 finalists. On November 19, 2020, there will be an International Award ceremony and announcement of the winners.

This text was based off Cukunft’s final report, written by Aleksandra Wilczura. 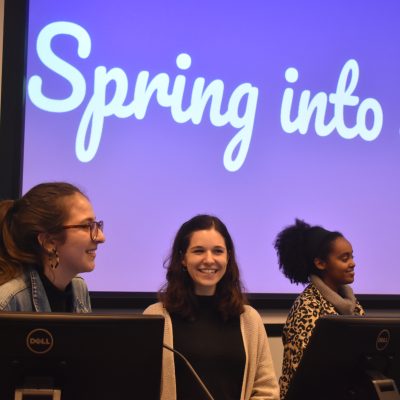