'Dreaming Beyond AI' by Nushin Yazdani and Buse Çetin

Visions of the future that are developed beyond the closed doors of government offices and large companies often look like the series Black Mirror: individual global multinationals ruling the world, surveillance capitalism, cameras and screens everywhere, every interaction evaluated, analysed, and classified. In these depictions, people often live together with machines, and just as often there are conflicts, hierarchies, and oppression as a result.

Our ideas about technology also shape technology. Likewise, when we call data ‘the new oil,’ as researcher Maya Ganesh puts it, it shapes how we see data and work with it. ‘Such metaphors determine how a technology is developed, built, and will be regulated (or not regulated),’ she writes.

Many tech companies let Hollywood’s science–fiction imaginations influence their product development. Not just the iPad and the smartwatch. Predictive policing systems echo the concept of the movie Minority Report (it is just the indispensable precogs that have been streamlined away), and racialized people in the US, UK, and elsewhere are already being disproportionately and unjustifiably monitored and prejudged by such systems. In the Chinese region of Xinjiang, facial recognition, wi-fi bugs, and spying programs are used to classify Uyghurs and other Muslims and imprison them in torture and forced labor camps.

Often those who feel the violent effects of new technologies are people who are marginalized in their countries and/or live in the Global South. In ‘Cheat Sheet for a Non- (or Less-) Colonialist Speculative Design’, Pedro Oliveira and Luiza Prado urge us to ask ourselves when imagining futures: ‘“Does my dystopia happen already in other ‘invisible’ (sic) places of the World?” It is good to know if what would be terrible for you and your audience isn’t already reality for others.’

Colonialism and its impacts, which are still strong today, have contributed to these conditions. The extractivist approach to technology’s raw materials and also to data, such as photos for training facial recognition systems, bears neocolonial traits. Scholar Michael Kwet analyses how digital services from the US are destroying local markets around the world and calls for speaking of Silicon Valley as an imperial power. Traffic chaos and congestion in cities of the Global South are to be solved by installing expensive smart city infrastructure in rich neighborhoods, powered by IBM and Cisco.

Our future seems to be defined by data colonialism, extractivism, competitiveness, and all-destroying desires for growth. It feels so much easier to dream of dystopian visions than to create concrete ideas for worlds that will be plural and worth living in for everyone. Yet these are more important. We can only live in a more just world if we dare to imagine it first.

This is what we have aimed at with our project Dreaming Beyond AI. It is a space for critical and constructive knowledge, visionary fiction and speculative art, and community organizing with critical AI voices in Europe and beyond. The project makes the use of AI as a gateway to broader societal questions around marginalization, imagination, futurism, feminism, and how we experience the present. The goal of the project is to de-center technology and use it as one existing tool for connection and coming together among many others.

The platform aims to enable people to understand how AI technologies can exacerbate existing power structures in our society, as well as to question the predominant narratives of AI, imposed visions of the future (the one future – a techno-dystopian one we have to counter with even more tech), and the oppressive structures that are beginning to emerge from the widespread use of AI technologies. And lastly, it will facilitate redefinitions of how AI technologies might or /should serve us, improve representation, equity and connection. By showcasing new/otherwise visions for AI technologies and society, we can inspire the creation of alternative realities.

With Dreaming Beyond AI, we hope to depict a pluriverse of perspectives and visions around AI. ‘Pluriverse’ is a term coined by the Colombian-American anthropologist and professor Arturo Escobar, who argues for a politics predicated on multiplicity, and thus a plurality of realities – ‘another possible is possible’. The pluriverse is a world in which many realities exist, as opposed to ubiquity of the current extractivist, globalist, neoliberal reality that has convinced us that any alternative will be deficient, even impossible, and must be built in its own hegemonic language.

This relational space hosts all kinds of media, artwork, and other contributions (audio, video, photo, research, links, 3D designs, and more) by various artists, researchers, writers, thinkers, and storytellers. One specific feature we established for Dreaming Beyond AI are the ‘Carrier Bags’, a concept derived from the speculative fiction author Ursula K. Le Guin’s 1986 essay ‘The Carrier Bag Theory of Fiction’.

“Before – once you think about it, surely long before – the weapon, a late, luxurious, superfluous tool; long before the useful knife and ax; right along with the indispensable whacker, grinder, and digger – for what’s the use of digging up a lot of potatoes if you have nothing to lug the ones you can’t eat home in – with or before the tool that forces energy outward, we made the tool that brings energy home. It makes sense to me. I am an adherent of what Fisher calls the Carrier Bag Theory of human evolution.

This theory not only explains large areas of theoretical obscurity and avoids large areas of theoretical nonsense (inhabited largely by tigers, foxes, and other highly territorial mammals); it also grounds me, personally, in human culture in a way I never felt grounded before. So long as culture was explained as originating from and elaborating upon the use of long, hard objects for sticking, bashing, and killing, I never thought that I had, or wanted, any particular share in it.” (Le Guin, Ursula. 2019. The Carrier Bag Theory of Fiction. Ignota Books. Page 30)

We envision carrier bags containing carefully curated resources, experiences, provocations, and memories tied to each other by people we invite to this space. Carrier bags make use of what is already there instead of always producing new content, and link those existing things in an intentional and meaningful way. In the age of algorithmic curation and the promise of hyper-personalized content, we envision an offline and online sharing process built on asking questions together, rather than information dumping. Our goal is to enable collective sense-making, community building, and dreaming.

As its name suggests, the carrier bag is a recipient and container, and to a certain extent that is what we are trying to embody as our mission in this project. Our main inspiration was the gift box Nushin sent to Buse. Nushin curated a gift box with many things that she thought Buse would like and appreciate, as well as things that reflect Nushin herself. We started thinking of a digital equivalent of this in the context of the pandemic, and in relation to knowledge creation and dissemination.

Each carrier bag is created by a different artist, writer, or researcher, and addresses a specific topic of the themes we have curated for Dreaming Beyond AI. It presents three to five links (to artworks, writing, articles, papers, interactive pieces, personal digital artifacts, and so on) that the person creating it deem central to their sharing.

What makes it different from a written piece in which works are cited is that the carrier-bag creator gives other people’s work a central place, and explains why they think it is especially relevant. They sometimes insert storytelling and personal experiences – as if a dear friend has asked them to help in better understanding a specific topic.

This intention makes it different to a link repository.

The carrier bag creates an opportunity for the audience to learn about the artist, their work, and also what they think is most important to learn about with regards to this topic – it can be called a glimpse into the artist’s mind and heart.

We appreciate that the concept of the carrier bag offers the opportunity to not always create something completely from scratch amid the new-is-better innovation hype cycle, but rather draw from already existing content and make it (better) known to a new or old audience. What is more, we see that digital artifacts and works on the internet are often scraped without permission, credit, or acknowledgment. We want to be mindful of this attitude and offer possibilities to counter it, so we have allocated resources within our budget to remunerate not just the creators of the carrier bag, but also the people linked to.

Navigating, participating, and contributing to Dreaming Beyond AI will – we hope – create a virtuous cycle of breathing, dreaming, and connecting. Breathing and grounding ourselves in our bodies before arriving to this digital receptacle with meditations and preparations to ‘dream beyond’ visions of futures imposed on us. And connecting along the way to realise how relational we are and to see and nurture the beauty in our connectedness.

Dreaming Beyond AI’s concept was birthed by Nushin Yazdani and Buse Çetin, but influenced and inspired by the works, thoughts, tireless love, care, and tenacity of many incredible feminist voices.

The web platform was designed and coded by Iyo Bisseck, and created in cooperation with ifa – Institut für Auslandsbeziehungen (Sabiha Keyif and Nina Frohm), and supported by Humanity in Action and the Alfred Landecker Foundation as part of the Landecker Democracy Fellowship as well as mur.at.

Part of this article was first published in German on the website of the Gunda Werner Institute, as ‘Die Zukunft muss nicht aussehen wie in Black Mirror’ by Nushin Yazdani. 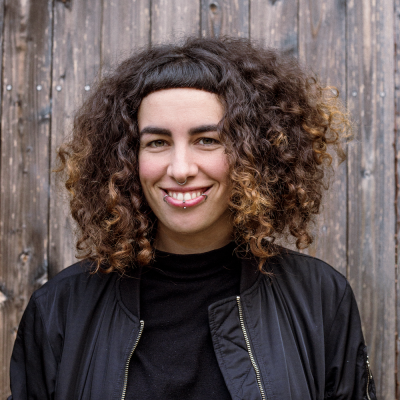 Landecker Fellow Nushin Yazdani was recently cited in an article written by Hessie Jones titled “Intersectionality, Inequity And Imminence Of AI: A Human Perspective” for the Forbes website.

Alfred Landecker Democracy Fellow Nushin Isabelle Yazdani is an interaction and transformation designer, artist, and AI researcher. Nushin would like to create a digital think tank around the topics of artificial intelligence, technology, and society.