She is the author of Eyes Off the Prize: The United Nations and the African-American Struggle for Human Rights, 1944-1955, which was awarded both the Gustavus Myers and Myrna Bernath Book Awards; as well as, Bourgeois Radicals: The NAACP and the Struggle for Colonial Liberation, 1941-1960.

Her third book, White Rage: The Unspoken Truth of our Racial Divide, won the 2016 National Book Critics Circle Award for Criticism and is also a New York Times Bestseller and a New York Times Editor’s Pick, and listed on the Zora List of 100 Best Books by Black Woman Authors since 1850.

Her research has garnered numerous fellowships including from the John Simon Guggenheim Foundation. In 2021, she was elected into the American Academy of Arts and Sciences.

She earned her Ph.D. in history from The Ohio State University. 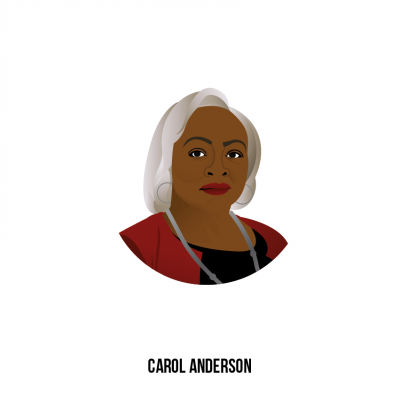