Throughout his fellowship in Atlanta, Jianhang Xiao learned various methods of civic engagement. During the fellowship different speakers shared their knowledge so that participants could learn about social issues and activism. One topic that came up multiple times was slavery in America. The fellowship’s programming deepened Jianhang’s understanding of how African Americans were discriminated in the past, and their activism to gain equal rights. In the past, many African Americans were not able to vote. One extraordinary example is Congressman John Lewis, one of the Big Six leaders of the Civil Rights Movement who organized a march for voting rights from Selma, Alabama to Montgomery in 1965. Professor Carol Anderson, one of the speakers at the workshops also talked about how African Americans face barriers to vote as well as the histories of voter suppression and disfranchisement like the poll tax, literacy tests, and the good character clause. Through Professor Carol Anderson, Jianhang learned the details of the history of voting rights. He wanted to share this knowledge at his own workshop.

Jianhang is familiar with many issues in Chinese immigrant communities. Congressman John Lewis inspired him to help educate immigrants about the precious right to vote. In Jianhang’s words, “voting is the bedrock of American democracy, but many immigrants do not know about the election process in the United States. I want to share the knowledge that I learned to immigrant populations.” Asian Americans are the fastest-growing racial minority group in the U.S; however, Asian Americans have one of the most dismal voter turnout rates among other racial groups. As a result, Asian Americans are often ignored on the policy table, in discussions concerning issues such as abolishing Specialized High Schools Admissions Test (SHSAT) and building a new jail in Manhattan’s Chinatown. Because of the lower voting rates among Asian Americans, politicians often implement policies that hurt the interests of Asian American communities. In order to make Asian Americans politically engaged, it is important for them to exercise their right to vote. The Voting Rights workshop provided the history of civil rights movement, the voting process, and understanding the general election.

Many immigrants do not know how to be civically engaged. The workshop aims to educate immigrant populations and help them understand the voting process and encourage them to vote at the general election. Jianhang informed them about various methods of being active citizens, such as volunteering, joining community organizations, and contacting elected officials to express their voices. The workshop was also highly advertised via Facebook as well as Chinese newspapers, which maximized the reach of the message that voting in the primary and general elections is important. Voting in local, state, and national elections is an important responsibility for an engaged citizen.

Moving Towards A More Inclusive and Future-Oriented Dutch National Commemoration. 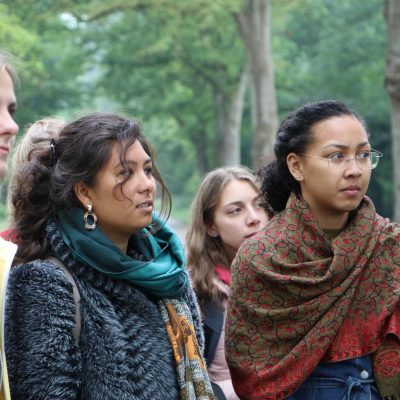 Lisa and Lecyca researched to what extent the Dutch National Remembrance is inclusive and sustainable, and how we can use lessons from the past to guide us into a more inclusive future.

The Integrated Collaboration for Change (ICC) addresses the issue of the growing strength of populism in Hungary by creating an open-source online platform that empowers citizens to effectively influence political decision processes and allows them to raise important issues to the general attention.