Strengthening Resilience of the Youth against Radicalization in the Western Balkans

WHERE: Albania, Bosnia and Herzegovina, Kosovo and Macedonia

This initiative aims to strengthen capacities for resilience of the young generation in the Western Balkans countries against radicalization and violent extremism by raising awareness of youth against radicalization through promoting shared values and social cohesion (interfaith, inter-ethnic and intercultural dialogues). Youth radicalization has been a problem in number of Western Balkan countries for few years already. The radicalization of youth has been perceived (but not exclusively) in connection with the radical forms of Islam, recruitment of young foreign fighters for conflict in Syria and Iraq as well as the spread of the DAESH-connected propaganda. The proposed project’s policy of impact is suggesting creation of network of active young people, their mobilization and activism directly from vulnerable communities, who will work as multipliers of the project’s ideas and goals in their respective communities, thus serving as young respected leaders in their communities. To be capable of fulfilling that role, they will be equipped with knowledge and experience through training and study trips they will attend.

Phase One
During the first phase, the project will map the problem of youth radicalization in detail in each of the project countries based on the field research through focus groups of 8-10 young people in Albania, Bosnia and Herzegovina, Kosovo and Macedonia at high schools and universities. This will include conducting interviews with key moral authorities in communities (e.g. imams, priests, teachers, CSOs dealing with youth issues etc.) and research on the internet and social media. Within this process, supporters of the project from among the key opinion-shapers as well as active young people will be identified. The project is ambitious to work with young leaders in communities that are capable and willing to advocate against radicalization and with national authorities to address the radicalization.

Phase Two
The second phase will consist of work with those identified active young people to build their capacities and raise their knowledge in order they are better equipped to address the radicalization in their communities among their friends and peers. This will include study trips and joint trainings in a form of a summer school.

Phase Three
The third phase will consist of creation of short promo videos (in each of the project country) advocating for young people not to slide down the radicalization path. The speakers on video and promoters will be the moral authorities respected in communities and active young people themselves.

There will be several project activities held during the project implementation period. It will start with a meeting with representatives of partner organizations in Tirana, Albania in September 2018 where there will be drafting of the project implementation timeline and coordination of activities. Research phase follows simultaneously in all three project countries from September 2018 until March 2019, the main focus is the vulnerabilities of youth towards the radicalization. Research will be conducted by being based on focus groups organized at high schools and universities in each of the project countries. Focus groups research phase of the project will consist of holding 90 minutes meetings with groups of 8-10 high school (preferably last grade) or university students of different gender and backgrounds and with diverse ethnic balance kept in consideration in 6 cities in Albania, Bosnia and Herzegovina, North Macedonia, Kosovo. Meetings will be coordinated by facilitator/ moderator and 1-2 note takers. Facilitator will be focused on the group dynamics and elaborated questions created to make an overall picture about student’s opinions of radicalization of the youth and how would they prevent it in their communities.

Phase Four
The following phase will involve conducting interviews with 15-20 interviewees of interest, such as high school teachers, academics, religious leaders, opinion shapers relevant in a city/ community/ region-state, institutions dealing with youth, education and religious affairs and an online survey. After extensive research stage a study visit for 3 most active in their communities selected young leaders to Slovakia is planned for June 2019 during the GLOBSEC 2019 Forum in Bratislava, Slovakia. The program will include meetings with experts and stakeholders in Slovakia, OSCE and participation at GLOBSEC 2019 Forum where a presentation of the full study will be presented. Presentation will include a promotion of the video production stage of project implementation against radicalization (planned to be implemented from May 2019 until October 2019), conceptualised as 4 short videos, one per each project country, against radicalization of youth consisting of declarations of young participants of the program and key stakeholders in each of project countries. Simultaneously a public campaign will be implemented extensively with a its goal against radicalization on social media and on youth networks including active young leaders until November 2019.

There will be 5 participants selected to attend a Summer School in Albania in July 2019. The program will consist of series of trainings, simulations and lectures for young leaders from Albania, Bosnia and Herzegovina, Kosovo and North Macedonia. Closing event of the project will be organized in Tirana, Albania in October 2019, thus finalizing the public campaign, publishing project.

Youth against Radicalization in BiH 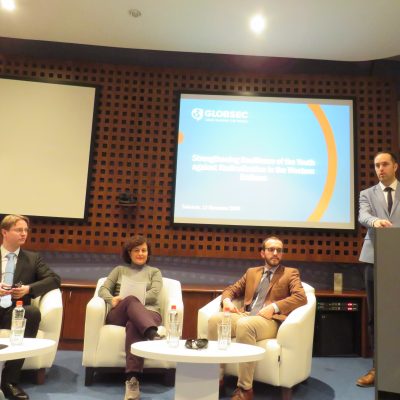 Study presentation in Sarajevo as a part of “Strengthening Resilience of the Youth against Radicalization in the Western Balkans” initiative. 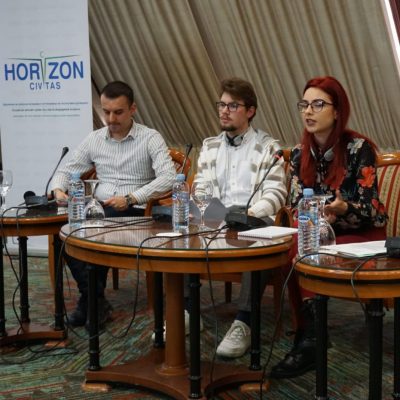 Closing event of the "Youth against Radicalization in the WB" in Skopje, North Macedonia. 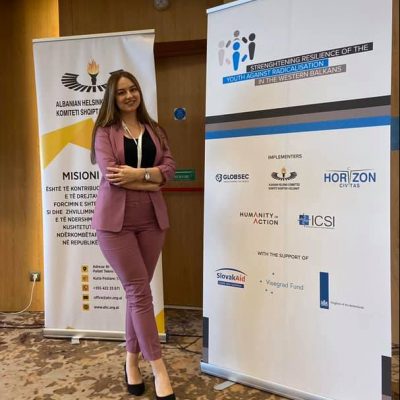 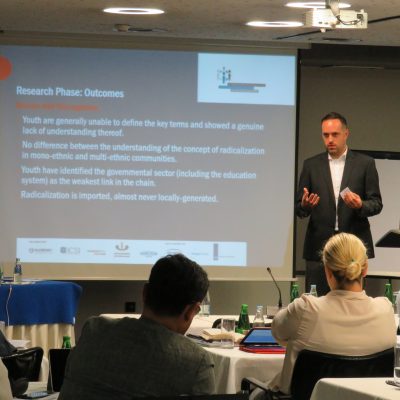 Humanity in Action BiH presented the results of the research study. 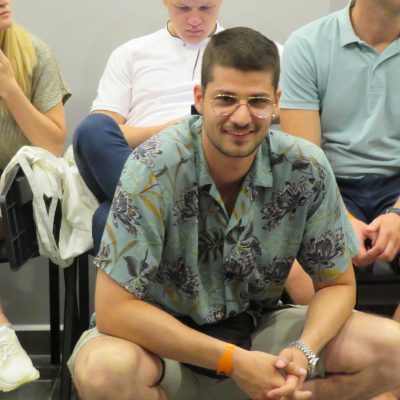 Humanity in Action BiH at GLOBSEC Forum 2019 in Bratislava 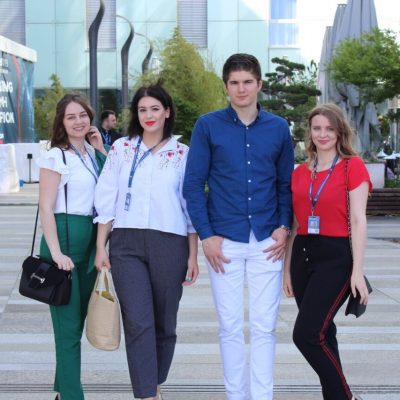 Perception about Radicalization by Young People in the Western Balkan Region

We are grateful for the generous support of:

This project was made possible through partnerships with: 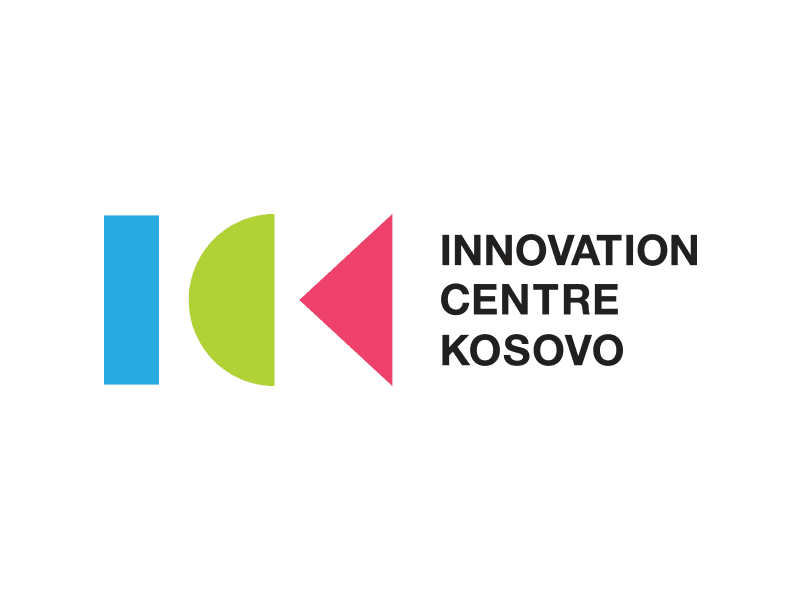 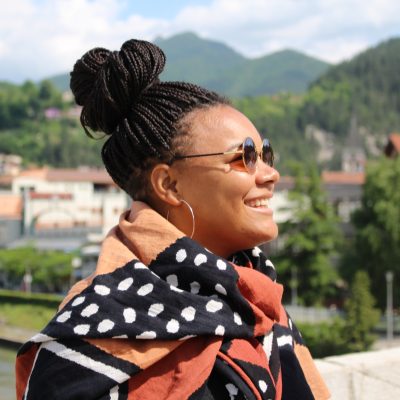 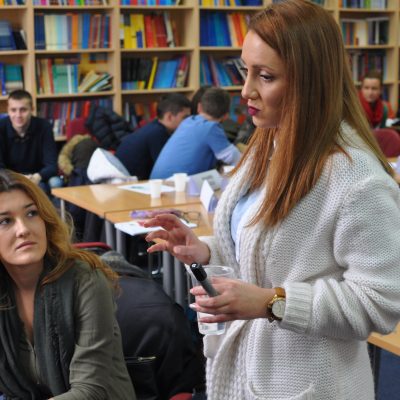 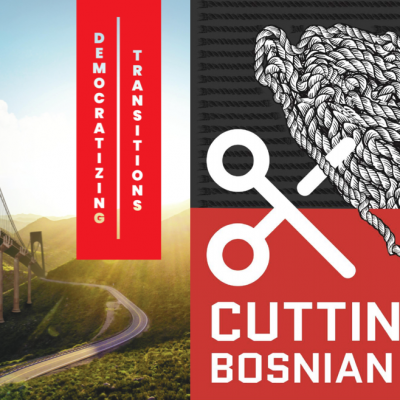