Palimpsests are often imperfectly erased. Layer after layer, when a new growth is formed, vestiges of the past are left behind. Senior Fellow Mishelle Shofet’s and Senior Fellow Marissa Schneiderman’s curiosity moved them to seek out these traces—physical, emotional, psychological, and cultural. ŻYD: An Index of Encounters, is the result.

With a grant from Humanity in Action, the two Humanity in Action Senior Fellows visited Poland in the summer of 2016, spending their time in Kraków, Wrocław, Łódź and Warsaw. Exploring, documenting, asking and interviewing, they immersed themselves in the culture in an effort to better understand the current landscape of Jewish life: what it looks like, how it is being constructed, and by whom. The notion of palimpsest guided and freed them, allowing the project to evolve and take shape as new layers emerged while others fell away.

What follows is an index; they present to you the artifacts. At the start of each chapter, this index (see page: 3) is pared down to the elements essential to the story that follows. This list is the entryway into the reliquary of related ideas, objects, emotions and sounds from which each individual encounter unfolds. They conceive of the work as an alternative tour guide to Poland. Inscribed and recorded, their encounters forge yet another layer of the palimpsest; they unpack and reinterpret the myth of Poland and its relationship to Jewish life and culture.

Tracking the Jewish absence in Poland is a very common rite of passage amongst Jews. Up until World War II, Poland was home to over 3.25 million Jewish people. And with over 3 million Polish-Jews killed on Polish soil, it makes sense that the predominant assumption is that Jewish culture was likewise eradicated during the war. Cultural tour groups offer trips that typically travel from death camp to death camp, leaving visitors to conclude that Poland is a country-sprawling cemetery. While it is important work to bear witness to this history through spaces where violence and trauma materialized in situ, if one only visits death camps, it is easy to conclude that death is the only story of the Jews in Poland.

For this project, Marissa and Michelle chose to focus on Jewish spaces of life, asking not how the Jews died, but rather, how did they live?  How are Jews living today, and how do we, as visitors, interact with the Jewish life that is there now? Not surprisingly, their pursuit of Jewish life in Poland led them repeatedly to an absence intrinsic to our field of inquiry. A festival celebrating Jewish culture in Kraków, organized almost entirely by non-Jews; a Jewish choir in Wrocław with almost no Jewish members; a mural in a burgeoning neighborhood in Łódź that reads, in bright red letters, “We miss you, Jew!” These are but a few instances that highlight the constant interplay between absence and presence. As with all dueling forces, spaces of life and spaces of death are inextricably bound, and witnessing this in real time both complicated and enlightened our perception of what it means to engage in contemporary Jewish space. They also sought out connections on a more intimate level, like tracking down the birthplace of Marja Ginsberg, Marissa’s grandmother, who kept her Polish origin concealed most of her life.

According to the 2011 Polish Census, there are 7,353 Jews in Poland today. Although this figure fluctuates from source to source (the Jewish Community Center in Kraków estimates up to 100,000), the fact remains that before WWII, Poland was home to the largest community of Jews in Europe. The term “Żyd,” (pronounced zhit) their namesake, literally translates into the Polish word for “Jew.” Harkening back to centuries of complex relations within Polish society, the term also bears highly charged connotations fraught with pejorative undertones.

The nuances and complexities of Poland’s history are myriad. During the Holocaust, Jews, queers, prisoners of war, ethnic minorities and the disabled were tortured and murdered at the behest of Nazi occupiers, largely on Polish soil. After the Nazi occupation ended and was overtaken by post-war communism, Poland continued to carry out pogroms—organized massacres against—in the wake of WWII, culminating in the deportation of 14,000 Polish-Jewish citizens in 1968. It is a place that is still recovering from communist rule which ceased in the early 1990s, where vacillating identities of victim and victimizer continue to complicate the present-day discourse of national history.

Melissa and Michelle are neither ethnographers nor journalists, and in their interviews, oral histories and encounters with strangers, they always made this clear. They approach this work as artists, humanists, and Jews. Rather than trying to know or understand, they sought to connect, trace and listen. Their guiding framework is based on the interrelationship of space, place and memorial. Each chapter highlights the liminal territory between absence and presence, the formal and informal, national memorials and more mundane lieux de mémoire. Much of the material they gathered during this process is fragmented or elliptical in form, and tying up the loose ends simply isn’t possible.

Since embarking on this project, governments in Poland, the United States and beyond have ramped up nationalist fear mongering and legitimized hatred in ways that are eerily familiar to the historical narratives perceived as “past.” Melissa and Michelle uphold the act of listening to the lived experiences of others as a powerful means of bridging gaps and building empathy. 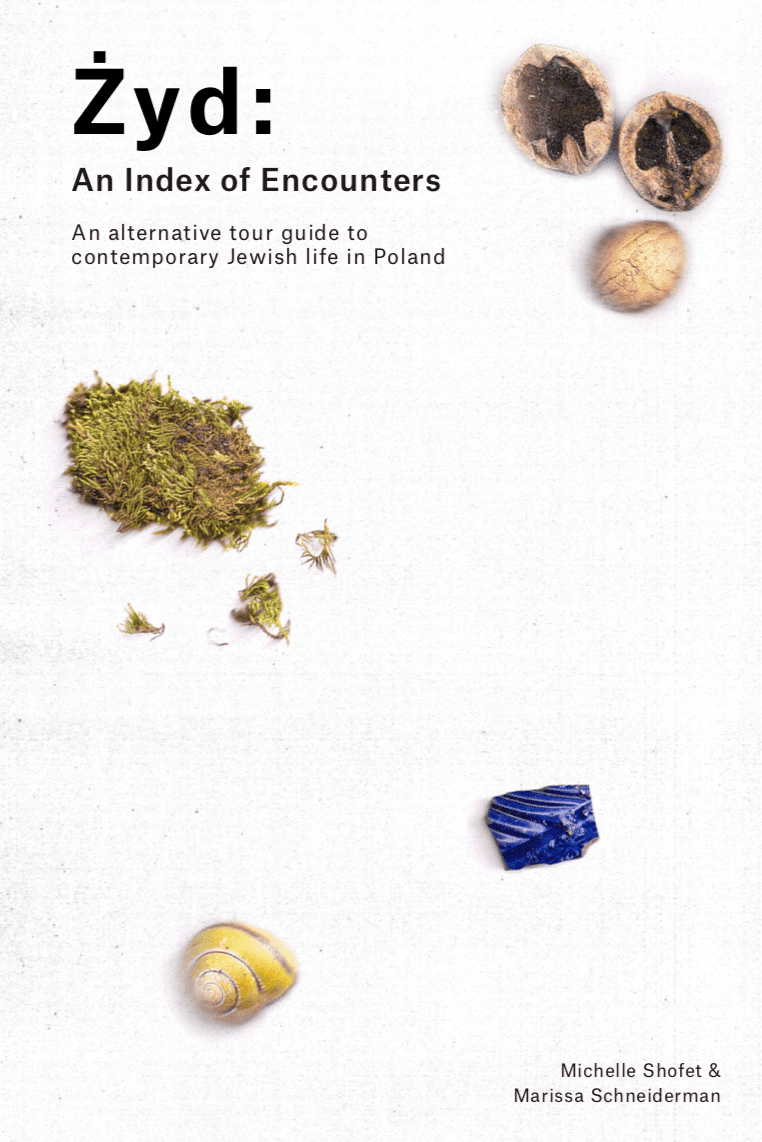