Senior Landecker Fellow Lievnath Faber attended the Amsterdam Conference on Tolerance to discuss her views on the matter. This is a topic of conversation that is particularly pertinent to life in big cities such as Amsterdam, where large numbers of diverse communities intermingle.

Being based in Amsterdam, Lievnath was able to speak at length about the aspects of tolerance she admired  in the city including Acceptance, Respect, and Appreciation, as well as the local government’s action towards fostering tolerance there.

We also got to hear about OyVey, an open Jewish community and organization which Lievnath founded, and it’s social justice project, “OyVey Acts“. The social justice project, Lievnath mentions, not only welcomes individuals to the community regardless of how they identify themselves but takes a deeper look and focus at the intersection between antisemitism and anti-racism.

Focusing in on what happens at the intersections between marginalized groups and providing the space for people to have conversations in which they speak about their similarities as well as their differences is very important for building tolerance. For Lievnath, speaking about things that we usually disagree on or that make us uncomfortable is where the magic happens.

In closing the conversation, Lievnath draws our attention to what she refers to as  the underlying question we usually take for granted. That is, while fostering tolerance is important, it’s not the only fix that we need as a community. True tolerance can be found by digging beneath the surface and finding ways to not only live together peacefully within the city but to share our lives with one another.

Listen to Lievnath in the recording below:

Lievnath is one of thirty 2020-2021 Landecker Democracy Fellows. This fellowship, a collaboration between the Alfred Landecker Foundation and Humanity in Action, was created to strengthen a new generation of leaders whose approaches to political and social challenges can become catalysts for democratic placemaking and community building. Read more about the fellowship here. 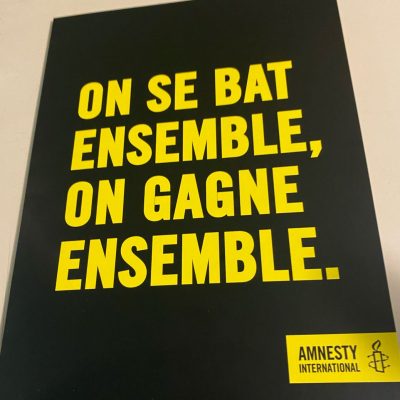 In September 2021, Landecker Fellow Tara Dickman facilitated a workshop to help Amnesty International France members work through the first steps in their long-term transition towards becoming an anti-racist organization.