In addition to knowing countless people who had been subjected to abusive stop and frisk procedures in France, many of these Senior Fellows had themselves been victims of such racial profiling. They knew that stop and frisk was not only an intrusive form of harassment, but that such encounters could end in serious injury and even death for the individual stopped.

A 2009 study showed that stop and frisk in France disproportionately targeted racial minorities, as police were more likely to stop blacks and Arabs. Yet, despite a growing understanding of this discrimination perpetuated by the police, there was no effective method of tracing stop and frisk activity, no legal recourse available for those who had been victims of this racial discrimination, and no political will to address the problem.

This group of Senior Fellows came together to develop a campaign that would not only raise awareness about the racially-discriminatory procedures being used by French police, but that would actually address the problem through effective legal reform.

Stop le Contrôle au Faciès did just that, by adding the issue to the media’s agenda during a presidential campaign, paving the way for the first class action lawsuit of its kind and encouraging legislators to draft three proposed laws that would require police officers to record these stops, in an effort to collect official data on stop and frisk incidents.

In order to achieve these monumental goals, the team undertook several steps. The Senior Fellows began by joining with other organizations interested in these issues, and even partnering with an international NGO for the class action project. Next, the team conducted in-depth research on the legal and political issues surrounding the country’s stop and frisk policy, which included interviewing those interested in addressing the problem and better understanding the power dynamics at play.

The Senior Fellows then organized outings in their neighborhoods so that they could share information with those who may become, or had already been, victims of racial profiling. One of the ways in which this was accomplished was through the creation of an SMS number that stop and frisk victims could text in order to receive a phone call within the next 24 hours. During the phone call, the victim is provided with information regarding legal options, including attorney referrals.

A campaign like this simply cannot be successful without a strong degree of trust between the campaign and the members of affected communities.

The Senior Fellows also created a YouTube channel, onto which they posted a series of videos depicting famous rappers sharing their own stories of being stopped and frisked. The official website provides an overview of all of the actions taken by the campaign, and provides useful information for those interested in participating.

Throughout the entire process, the team organized several public activities on the streets, including photo projects and press conferences.

These Senior Fellows are adamant that a campaign like this simply cannot be successful without a strong degree of trust between the campaign and the members of affected communities. Additionally, it is imperative that such a campaign involve the police as stakeholders. Throughout this process, the team has been involved in ongoing discussions with police unions, the Equality Body and political parties. Those interested in joining the campaign can contact the Senior Fellows through their website. 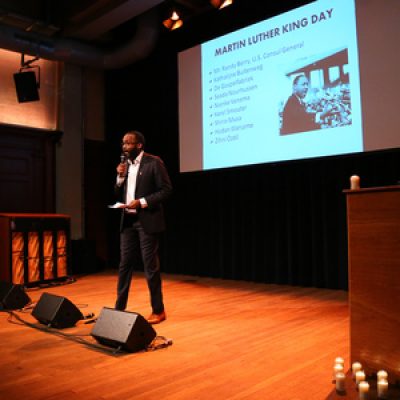