As we understand it, time exists in three states: past, present, and future. We define these three states in relation to one another. The past is that time which we have already experienced, that to which we cannot return. The present is the current moment, the site of our immediate experiences. And the future is that which is to come, holding within it the experiences we have yet to have.

It is as if we are stuck in an endless loop, continually asking for the same basic recognition of our humanity

For marginalized communities, however, time collapses upon itself. The present stretches indefinitely, homogenizing everything within its reach. By design, each day is the same, a cycle of repetition and stagnation purposefully constructed. The startling symmetry of the demands of the 1960 Appeal for Human Rights and its 2017 iteration highlight the fixed status quo. It seems as if no time at all has passed between the writing of the two documents—it is as if we are stuck in an endless loop, continually asking for the same basic recognition of our humanity.

We even find this idea echoed in the language used to describe our communities—the words demonstrating how we are locked in cycles of violence, cycles of poverty, and cycles of abuse. We experience time and history not as an upwards-sloping linear progression, but as a constant return to the place at which we began. Time, in a sense, halts.

Restorative justice can be seen as an intervention aimed at reverting such a collapse.

Restorative justice can be seen as an intervention aimed at reverting such a collapse. It links the idea of justice to the passage of time and the narratives we construct around it. Central to the process is the belief that only once the harms of the past are acknowledged in the present can there exist even the hope of a just future.

Thus, we enter into the process of restorative justice with the intent of eventually moving forward. Though perhaps distant, the future into which the restorative procedure propels us is one in which each party—and every party—exists together in conditions of equality and peace. In this future, we are the ideal community.

It is here that I place my first worry about restorative justice. The past is irretrievable.

To realize this dream of unity, the restorative process begins with the acknowledgement of the experiences of those who have been harmed in the past. The importance of this moment is to recognize within the public narrative the voices and realities of those who have been previously silenced. Such a recognition underlies the notion that only once we have all achieved such a common understanding can the proper address of the harms that took place occur.

It is here that I place my first worry about restorative justice. The past is irretrievable. This asymmetry is built into the fabric of our universe. Even if quantum physics has demonstrated that time itself does not flow in the way we experience it, from its very creation, our universe has been defined, in part, by its asymmetrical nature. What has been broken cannot be unbroken.

By virtue of this asymmetry, our narratives of the past take on a range of existences. Fact exist, yes, but we also receive the past in the form of individual and collective memories, memories whose meaning may resist interrogation by standard models of rationality.

To embrace the past as a means to an end is to risk the repetition of the very silencing the restorative process seeks to avoid.

It then seems to me an unwise approach to begin discussion of a previously dismissed, denied, or discredited past with the aim of eventual reconciliation at the forefront of our minds. The past—that which sits at the confluence of history and memory—cannot be summoned solely for the purpose of ensuring some imagined future. It must be allowed to exist in its entirety, with the full variety of voices and realities it represents. It is messy; it is multi-vocal; it is a collective production. In this sense, the past can never be taken as a given.

To embrace the past as a means to an end is to risk the repetition of the very silencing the restorative process seeks to avoid. Necessarily when we work within the framework of ends and means we admit into our approach a calculus built on compromise and concession—“the ends justify the means.” Within the context of restorative justice, I fear we may tolerate the dismissal of uncomfortable narratives in pursuit of our envisioned future. I fear we may quiet memories in the hope of finally achieving equality. When the idea of the future is so tantalizing, it is hard to resist this urge.

Within our current understanding of justice exists the desire for neutrality. Ostensibly, we come together in the state of nature in part to establish an independent—meaning neutral—arbiter to decide the outcome of disputes (or, at least that was Locke’s account). That which is just is also in some way neutral.

Thus, we can see the process of restorative justice as an attempt to neutralize a violent past. We welcome it, state it, acknowledge it, and respond to it with the hopes of curtailing the effects of such violence. And on this flattened, defused version of the past, we seek to build our new community, one devoid of the injustices and inequalities of previously visited upon us. The idea is that once we have come to terms with our demons, we can silence (and thus, forget) them.

I am skeptical of the process by which this neutralization occurs

Here lies my second worry with restorative justice. I am skeptical of the process by which this neutralization occurs. For each act of violence, for each perpetration of a wrong, restorative justice seeks to identify a respective want, need, or preference of the party that has suffered the wrong. Addressing this want, need, or preference is supposed to restore the harmed party, returning them to a state prior to the harm.

This approach to justice presumes that the past exists as something that we can comprehend fully with our current understandings of cause and effect. And I’m not quite sure this is true.

For instance, one of the outcomes of the suspension of time experienced by marginalized communities is the accompanying lacuna in our knowledge of them. We lack a theory of cause and effect comprehensive enough to accommodate all the ways in which the violence of the past influences the present. The dominant paradigms of these theories were not built with marginalized communities in mind.

Thus, to seek to address the cause and effects of this violence of the past is to impose an incomplete knowledge on an already determined reality. I do not think this binds us to inaction towards past harms. However, I do think this means we must be wary of what exactly such the restorative process can achieve.

In an interview in 2014, the physicist Paul Davies spoke of a current trend in theoretical physics to view time as an emergent, or secondary, property of the universe. One of the outcomes of this view is that there then existed entities pre-time, primordial stuff that allowed for the creation of time itself.

The way forward seemed undetermined, lacking completely in any sort of understandable shape.

Though I think Davies might disagree with me, I like to think of justice as one of these pre-time entities. In my mind this places justice outside the reach of the human forces of good and evil. This view bequeaths justice with an independent existence, one which belongs to no individual, community, or government. It frees the idea of justice from the potential of suffocation beneath the mounting weight of endlessly collapsing time.

Before coming to Atlanta, I was paralyzed. I could imagine no future when I closed my eyes. The way forward seemed undetermined, lacking completely in any sort of understandable shape. What I had been told was linear had shown itself to be a downward spiral. I had forgotten how to imagine the future.

After a month of learning and reflecting, I am still left without a vision of the future. However, I am no longer paralyzed. Rather, I refuse to imagine the future. My refusal is not meant as a denial of the possibility of one. Rather, it is meant as a step towards viewing time in its entirety, with the hopes of glimpsing the bare face of justice. 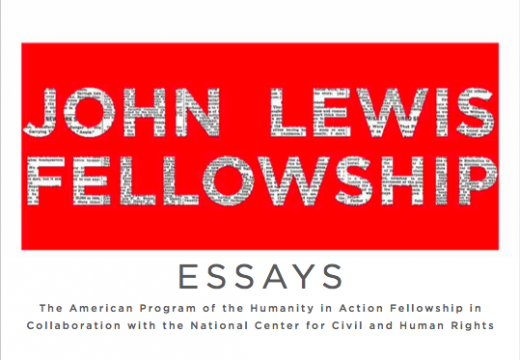