How do you build coalitions to enact change when your “allies” don’t truly understand what they are fighting against?

We shall overcome is a gospel song that was adapted from the song “I’ll Overcome Some Day”, a hymn by Charles Albert Tindley that was first published in 1900. This song became the anthem of the civil rights movement and was sung in many important marches. The song talks about overcoming racial injustice. It says, “We’ll walk hand in hand”, meaning that white people and black people will walk together and be one society. “We shall live in peace” meaning that white and black people can live together in peace, in one society. “We are not afraid” meaning we are not afraid to fight for justice. As I have learned about civil and human rights and how the older movements have influenced contemporary movements, I start to wonder. It is easy to sing “We Shall Overcome” when you can see the obstacle that you are overcoming. It is easy to walk hand in hand when you can see who you are walking with. It is easy to have no fear when you know who the enemy is. What happens when the lines blur? Friend today, enemy tomorrow. How can we live in peace when we can’t see the obstacles to peace because they are dressed up as a white man singing off key “We Shall Overcome” in khaki pants and a smile? How do you build coalitions to enact change when your “allies” don’t truly understand what they are fighting against? They don’t truly understand the things that they are fighting against because they are repeating many of the same toxic actions they are supposed to be against, this is called toxic liberalism.

At the Speed of Sound: Tracing the Civil Rights Movement Through Music workshop we learned the power of music in the Civil Rights Movement. Dr. Bradley talked about how music was used to uplift black people when they were marching. That black joy was a form of protest. I would like to believe that joy didn’t just come from the beautiful sound of their voices singing but from the fact that they were marching with people who wanted freedom no matter the cost, even death. Maybe this is because their humanity was on the line.

Seven percent. That is the number of Fellows that Humanity in Action selected out of thousands of applications. This coalition of activists and freedom fighters are supposed to be the best and brightest in the world. This being the case, how do they fall prey to the same ignorant ideals that people who are not “woke” fall prey to. It makes me think that if this is our best chance, if these are our best arc benders, then the fight for justice is already lost. Why even try? Why even try, because if there is one thing I have learned in life is that failure is not an option. The only thing this changes is the stakes and as an NCAA division one athlete I am used to high stakes.

I would like to believe that joy didn’t just come from the beautiful sound of their voices singing but from the fact that they were marching with people who wanted freedom no matter the cost, even death. Maybe this is because their humanity was on the line.

Dr. Mawuli Davis from the Sports as a Platform for Protest and Activism panel said organization is needed not just mobilization. He said make friends outside of your organizing group. In the film we watched Brother Outsider: The Life of Bayard Rustin, he made a groundbreaking observation when being accused of selling out when he became involved into politics. He said that in protesting you never compromise but in politics there is always compromise. Politics, meaning implementing policy to get the rights you were protesting for, is how you create long lasting change. Dr. Deborah Richardson from the Human Trafficking Institute said that we must hold the line against human rights abuses. Implementing policy is how you hold the line. Before I came into Humanity in Action I used to tell activist circles about the importance of organization but my plea fell on deaf ears. Humanity in Action has solidified my confidence in this belief.

I have witnessed a lot of depressing and disturbing things, but the real question is what will I do with this knowledge. Dr. Hooker talked about building narratives. He said that we create narratives in our head and we expect people in society to follow this narrative, but it is all imaginary. I have built a narrative where I expect people who say they believe in the same principles as me, that people who at least look like me, and who want to see the same changes in society, want to go about it the right way. This is a narrative, a story, and it is not true. I have to start realizing just that because someone looks like you and they say that they believe the same things as you, that doesn’t mean they will do right by you and by the people you are helping.

Humanity in Action taught me the importance of narratives and how people who seem so different from you can have the same experiences as you. It also showed me that people who seem like me, can have very different experiences than me. Humanity in Action taught me that organization of a movement is very important. It taught me to create new narratives, where I set standards with people I want to mobilize and organize with. In addition, to not expect the people I mobilize with to be my friend, to like, or to even support me. That is why Dr. Davis said it is important to make friends outside of the coalition. I will take with me the stories that my Fellows and speakers have shared with me in presentations, in the hallways and in the fourth-floor common room and cherish them and continue to see people for their humanity. I plan to continue the work even though it is hard, and it seems like there is no hope, no justice and that everyone no matter what their identity is fallible to toxic liberalism. It is unfortunate that Humanity in Action is so selective because everyone needs to be in this space. There are very few learning environments like this in the world. I am not so sure if I will miss the smoke-filled streets of Atlanta but I know that this city and this program have given me the skills to really do this work and create a new narrative. 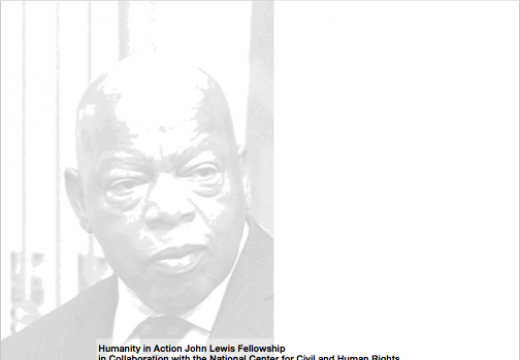