Have a look at this year’s Academy for Human Right’s Fellow Noa Richard’s film on Syrian refugees in Miami!

As Noa explains: “The Syrian Refugees of Miami” highlights the stories of recently-arrived Syrian families who were granted asylum in Miami, Florida. Although Miami has embraced the presence of various refugee communities, it failed to collectively welcome the Syrian refugees. A grassroots movement known as the South Florida Syrian Supper Club sought to change this failed welcome with monthly dinners held in honor of the families. Syrian women cooked their food and shared their stories with Miami locals; all proceeds from the dinner went directly to the families. Apart from the supper club dinners, one on one interviews were conducted to allow for deeper conversations that touched on the pain of the past and what a future looks like in the United States.  My intentions as a documentarian were to disrupt the narrative around refugees that has often been limited to news headlines that strip away the humanity and individual experiences of Syrian refugees. In reality, these are individuals who are members of our communities and whose voices need to continue to be heard.” 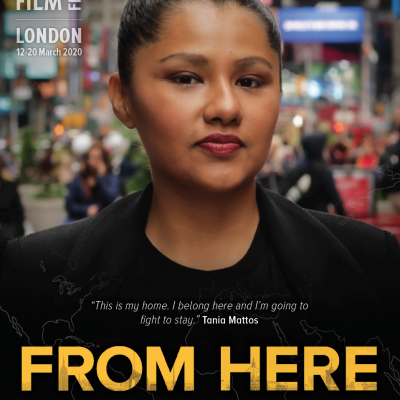 The film "From Here" (formerly titled With Wings & Roots) has been selected for the London Human Rights Watch Film Festival.

The film explores the pressures on reality, community and active citizenship in a time of increasing social and political discord.