This civic campaign is a follow-up project on ‘BiH in Motion’ – one of our most successfully implemented EDVACAY campaigns so far. The creative team behind “BiH in Motion”, Hata Kujraković, Ajla Keško, and Tajra Hadžić, continued to cooperate with Senior Fellow Alma Mujanović, the founder of “Sign for Language” in the “Show Me a Story” campaign.

With the “Show Me a Story” campaign, they will actively communicate with young people, increase the number of sign language learning videos available online, and send a transnational message about BiH as an inclusive society.

Given the great success of the BiH in Motion campaign and the great interest of the public, fellows decided to continue with the active promotion of sign language, demarginalization of hearing-impaired people, and promotion of tourist sites in Bosnia and Herzegovina.

The first part of the project is a video presentation of selected sites in BiH that were visited and presented by the #BiHinMotion team, while the second part of the project includes an active participation of young people and a prize game. All those interested had the opportunity to tell a brief story (up to a 1-minute long video) about their city or favorite place in the city where they live, and members of the team taught them how to show their message in sign language. The team included the best videos in the final film and rewarded the authors with a cash prize.

Snapshots from the Shootings

During the making of the first film #BiHuPokretu, we focused on the beauty of the cultural and historical diversity of our country, as well as on its natural resources. Now, we want to go one step further and show the soul of this country, show places filled with emotions, show happiness, fun, and adrenaline. Our vision is to hear the stories of young people from all over BiH, but we also want everyone to “hear” them and to let them know that those with hearing impairments are not invisible to us.

Winners of the Competition 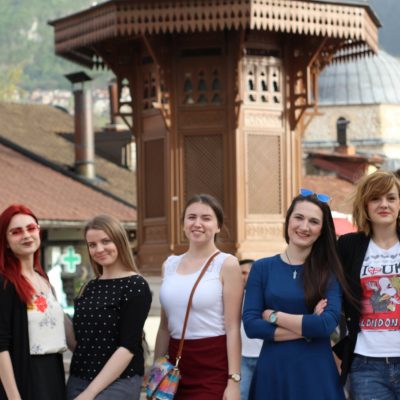 Through a strong media campaign and partnership with local organizations, #demandculture aims to begin a movement showing the power of culture and small-town charms.