There is a growing disconnect between the American public, activists, and policy practitioners who focus on Israel. In a political climate where the Israeli government advances policies—like constructing settlements in occupied territories—that undercut the very foundations of a just and secure peace with the Palestinians, we lack stories of hope that can help to sustain narratives of peace in the context of Israel and Palestine.

Senior Fellow Lily Faust set out to create a project that would promote public engagement with the future of policy affecting Israel and Palestine. By promoting the work of those who are pro-solution and pro-peace, she aims to encourage American youth, humanize participants, and deconstruct the faceless dichotomy of what it means to be pro-Israeli or pro-Palestinian, all the while embedding the project in her local Washington, D.C. community.

Since moving to Washington, D.C., Lily has had the opportunity to become involved in the foreign policy realm. When she came across New Story Leadership, a program that equips “a new generation of Palestinian and Israeli change agents with the leadership tools needed to create social, economic and political change in the region,” she knew that she wanted to engage with the topic outside of her work as a consultant for Americans for Peace Now. Lily was inspired when meeting the New Story Leadership participants, ranging from Israeli fellows who are seasoned in organizing civil society, to young Gazans who have courageously journeyed to Washington to share their stories—in some cases, under threat of government retaliation—and she wanted to get involved.

Lily’s project is meant to bring together separate communities with shared values to build a more permanent infrastructure for engagement, integrate resources, and give the work of the Israeli and Palestinian fellows greater exposure.

She developed her Action Project with the aim to integrate and streamline the work of different peace building organizations, believing that developing greater capability allows the critical work of their initiatives to reach a wider audience and change public discourse around the Israeli-Palestinian conflict. Her project is meant to bring together separate communities with shared values to build a more permanent infrastructure for engagement, integrate resources, and give the work of the Israeli and Palestinian fellows greater exposure.

Initially, this involved an administrative component, primarily in managing the necessary logistical pieces to bring the stories of the New Story Leadership fellows to the public. Lily had to organize the venue and major players for the keystone event, the Dove, which was a joint venture between New Story Leadership and Americans for Peace Now. The Dove brought stories of the occupation of the West Bank to the Washington public.

In addition to supporting the event itself, Lily’s work included promoting the event on social media and through the Americans for Peace Now network, as well as assisting in producing a podcast episode featuring one of the Israeli fellows. After the conclusion of the event, the core of this project lies in building a sustainable, ongoing partnership with New Story Leadership, spreading the work of their fellows and their message, and reaching new audiences. As a result, the goals of this project branch much further than the keystone event and include building lasting partnerships with relevant nonprofit organizations and promoting storytelling-for-peace within the public sphere in DC.

An inspirational story from the keystone event that stood out to Lily was from Eran, a former IDF combat soldier whose experiences in the occupied territories encouraged him to become a peace activist.

An inspirational story from the keystone event that stood out to Lily was from Eran, a former IDF combat soldier whose experiences in the occupied territories encouraged him to become a peace activist. He grew up in Kochav Yair, a small town right on the Israeli edge of the green line, the de facto border between Israel and the occupied territories. As a soldier, Eran worked for the IDF canine unit, leading a bomb-detection dog in search of hidden weapons and explosives.

On his first combat mission, he was sent to the Palestinian village of Azzoun, a mere ten minutes from his hometown. Once on the ground, he described the initial feelings of pride in employing his soldiers’ training to defend his homeland, giving way to the realization that stock images of Palestinians as grizzled terrorists and violent youths holding stones did not match the wide-eyed civilians he confronted. Eran’s process of politicization heightened over the course of his service, as he experienced brutal missions requiring searches, seizures, and raids of Palestinian homes, which were intended as a show of Israeli force on the ground, and treated the soldiers as mere pawns in a complex structure of occupation.

The decision makers who strategized the occupation held the lives of Eran and so many other Israeli youth in their hands. Eran realized that these people did not care about him, nor the kids that were risking their lives to uphold an unjust military rule. This building sense of betrayal, that a generation was being used to conduct unethical actions that were eroding Israeli society from within, caused something to crack within Eran. After his service was over, he began to volunteer for Peace Now, Israel’s preeminent peace movement. He sought to work with young people, to get them to take action and to think about the bridges that needed to be built in the aftermath of a political agreement with the Palestinians.

He came to realize that he had more in common with his Palestinian peace activist peers than he did with the current right-wing, Israeli government leadership. When his activism brought him to the United States with the New Story Leadership Fellowship, he met a young Palestinian man, Mohammed, who had channeled his experiences of abuse and detention into teaching English to Palestinian youth.

Eran and Mohammed grew up less than ten miles apart, but their experiences couldn’t be more different. From their initial meeting in the US, to working together in Washington, the two tell a tale of mutual recognition, reconciliation, and friendship, which is an inspiration for the peace building process.

This is an ongoing project that she hopes the Humanity in Action community is able to engage with.

Lily was surprised that the challenge of the project did not lie in developing a sufficiently ambitious idea, but in turning something of scale into something tangible and pinning down sweeping ideas into a concrete plan. Her advice to others would be, “focus upon breaking your project down into manageable steps, making a schedule, and thereby operationalizing your ideas, so that they can take shape in the form of realizable goals and achievable output.”

This is an ongoing project that she hopes the Humanity in Action community is able to engage with. The upcoming steps involve creating an open-ended partnership with New Story Leadership and spreading the work of the Israeli and Palestinian fellows through an expanded network. Lily hopes to develop testimonies from the fellows about forthcoming Congressional legislation, humanize the impact of policy making around Israel/Palestine, and spread fellows’ stories to the lawmakers who hold the power to institutionalize change. In addition, she is organizing an upcoming educational study tour of Israel and the West Bank that includes the fellows’ perspectives.

Beyond this, the Humanity in Action community can play a role by sharing this project, both by word of mouth and through social media, and by donating to the partner organizations Americans for Peace Now and New Story Leadership. 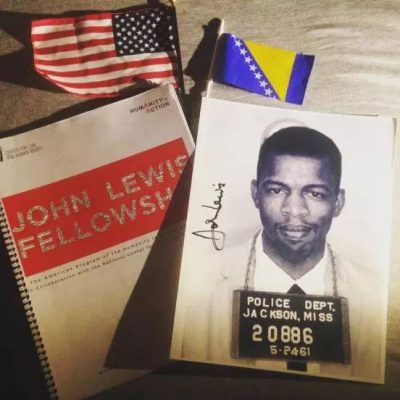 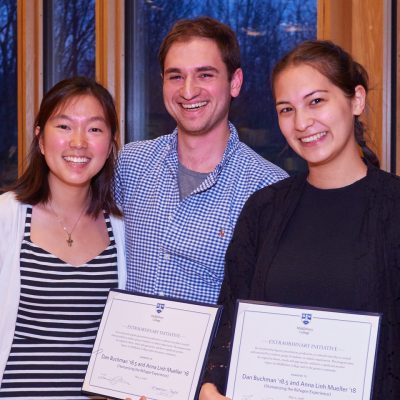