Humanity in Action is excited to share an additional three of the eleven projects that were selected for a grant for the 2019 campaign: Addressing Antisemitism in Germany, Poland, Ukraine, the US and online. These projects, those previously announced and those soon to be announced all aim at providing information about historical and present-day forms of Antisemitism, prevention, creating meeting spaces between people with Jewish and non-Jewish identities, linking history and remembrance with the present, developing information or prevention campaigns (empowerment, awareness raising, story telling) as well as targeted resistance to Antisemitic statements or actions.

All grant recipients be announced in the coming days leading up to our Conference & Action Academy in Berlin (October 24 – 27, 2019), where recipients will get together to discuss and further develop the project proposals. All projects to be announced are of equal recognition and confidence by Humanity in Action – the order in which projects are announced has no bearing on their selection or amount of grant support. Senior Fellows were invited to submit project proposals by September 1, 2019. All projects were eligible to receive up to 5,000 Euro.

Stay tuned for more grant-winning projects to be announced!

Get active in your neighborhood! (Werde aktiv in deinem Kiez!)

This one-year project aims to empower young people in Berlin ages 14 – 16 to become engaged in their neighborhoods and seeks to foster a deeper understanding of democratic decision-making, minority rights and solidarity in a multicultural society as well as the need to protect human rights for each and everyone. Jewish life in Germany, remembrance and Antisemitism will be an integral part of the curriculum.

The project will go beyond a predominantly workshop- or input-based format and will also offer participants the chance to become active themselves. By conducting their own small Action Project in the second half of the course, the team hopes to create a learning experience where students, who are usually at the receiving end of ‘help’, can bring in their own ideas, creativity and skills to work towards tackling and raising awareness around a social problem or cause they have identified.  The project will be part of the school’s extracurricular activities offered on Monday afternoons.

The project uses storytelling and social engagement to broach issues of Antisemitism in present-day Poland. The team will create an immersive exhibition and hold a series of events designed to create a space of learning, vulnerability and mutual-understanding.

For this project, the team will create an exhibition of their past work on “ZYD: An Index of Encounters,” alongside the work of local Polish artists engaged in similar themes, in a gallery or community space. Michelle and Marissa aim to exhibit their research in a dynamic way to be shared with both the broader Polish community as well as the throngs of foreigners who flock to Krakow for the Jewish Culture Festival. The Festival will serve as the context for the team’s work because of its historical importance and built-in audience of attendees already engaged in questions of Jewish history and culture. A series of events will take place over the course of this week-long exhibition and residency: storytelling open hours wherein visitors will be given a platform to share their own stories, thoughts and secrets surrounding the topics of Antisemitism and Jewish identity in Poland; anonymous sharing open hours; an artist talk about the iterations of ZYD; a closing reception and party.

Project in the United States

This project attempts to raise awareness on Antisemitism and hate-speech among the undergraduate students in Nebraska. The project encompasses a human rights academy in which its alumni become ‘upstanders’ for the rights and dignity of others. In cooperation with the ACLU of Nebraska, the Anti-Defamation League, the Institute for Holocaust Education (IHE) and the Illinois Holocaust Museum and Education Center (IHMAEC) in Skokie, the team plans an educational project for 15 undergraduate students from the University Nebraska-Lincoln (UNL).

Over the past two years, the number of antisemitic attacks in Nebraska increased by six percent. Jewish families, friends and communities were attacked. Nebraska is also known to have a large distribution source of printed neo-Nazi materials. This is why this project and its localization are so significant as it touches on a region that is often overlooked and considered peripheral to human rights activism. 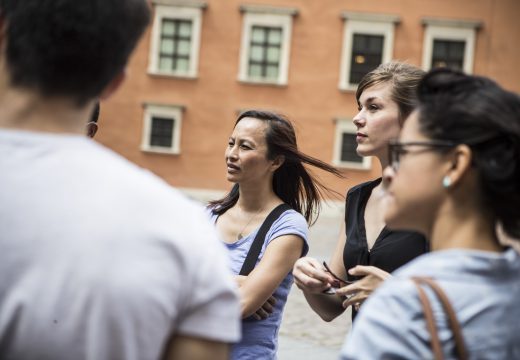 About the 2019 Grant Competition

Learn more about the campaign to which these projects applied.

We thank the Foundation EVZ for their generous support of this project.