The Catalyst Commissions is an initiative to catalyze civic participation and democracy via the power of art. It awards grants to artists who use art to engage and empower communities in New York City.

From many inspirational proposals, residents of the local communities recently chose five awardees.

The five awarded projects are:

Jackson Heights Open Streets – Democracy in Action: Under Helen Quinn and Ondine Crispin, Dovecote Collective present a silk screen blitz on the streets of Jackson Heights to empower voters to envision their ideal neighborhood and to elect representatives who deliver.

TeenVote NYC: The Dream Unfinished is an activist orchestra using classical music to engage audiences in social justice. Their project is a youth-led campaign where teen classical musicians create digital materials to promote voter turn-out in the 2021 NYC elections.

Comic About White Supremacy in Queens: Kimberly Chan movingly draws a short comic about subtle and blatant white supremacist ideology in the world’s borough. Using a personal lens and images recognizable to Queens residents, she educates and urges action.

Chinatown Icons: Rajiv Fernandez knows that words matter. Over the past year, anti-Asian rhetoric resulted in increased risk for the Asian-American community. Rajiv moves us away from xenophobic language via bilingual posters in Chinese and English to emphasize the value and civic potential of each individual. These posters will be wheatpasted, a visual reminder urging civic action.

The Catalyst Commissions Implementation and Funding Partners include: Queens Council on the Arts; Think! Chinatown; The Creative Sanctum; Alfred Landecker Foundation; and Humanity in Action.

Berlin Fellow Yannik Roscher recently published a manual on how people can organize Democracy Conventions in their communities, at their local level. Roscher's NGO "mehr als wählen” focuses on democratic participation and the inclusion of people in democratic processes. 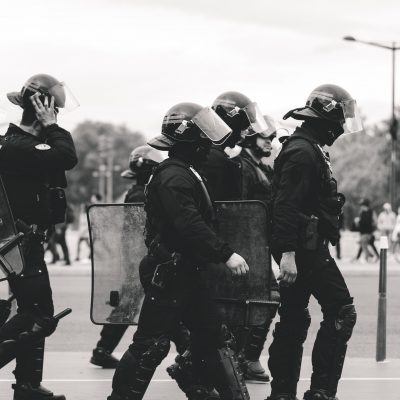 Senior Fellow Charlotte Recoquillon has recently released Episode 1 of her new podcast series "Stop Killing Us." In light of the Black Lives Matter Movement and the murder of George Floyd, Charlotte discusses police brutality, which is not unique to the US and is also present in other countries.