Live in Washington, D.C. long enough, and you are bound to collect your own anecdote involving Congressman Lewis. I first met the Congressman as an anti-hunger activist. The House of Representatives was on the brink of defunding the federal food stamp program, and the Congressman granted roughly ten of us an audience on the issue. He went on to play an instrumental role in securing the largest expansion of food stamp benefits in almost two decades.

Years later, I found myself back in D.C., this time as a political appointee at the Corporation for National and Community Service. The agency had organized a local event at a struggling public school, where volunteers assembled backpacks for low-income students around the District. The event was hosted by First Lady Michelle Obama, and the usual suspects of elected officials and other dignitaries joined at various points to volunteer, and just as importantly in Washington, to land a photo op with Mrs. Obama. The First Lady was stationed at a central table, with a press pool opposite, and enough room at her sides for a rotating cast of 1-3 other volunteers. My assignment for the morning was to ensure everyone on a designated list received their turn in those coveted spots.

My afternoon was free. I was meant simply to volunteer and found myself stuffing crayons, markers, and notepads into earth-toned backpacks alongside three young boys from the neighborhood. In a few weeks, all three boys would begin as sophomores at the local high school. I was grateful for the reprieve.

I do not wish to enlarge the Congressman in death beyond what he was in life. But as powerful as he was in so many ways—in his conviction, his rhetoric, his moral courage—perhaps we could all do well to remember that he was powerful in his quietest moments, too.

But then Congressman Lewis showed up. Rhoda Glickman, my boss and a close personal friend of the Congressman, grabbed my arm and rushed me over to greet him. A colleague captured the moment. Rhoda can be seen, in her characteristic fashion, waving her arms frantically while generously propounding my scant resume.

When Rhoda finally let up, the Congressman shared that his staff had been unable to join him at the event, so at the last minute, he lacked any support. Rhoda offered that I could staff the Congressman. I was certain he would decline, Rhoda having just bored him with the mundane biographical details of some no-name kid new to the D.C. treadmill. But the Congressman, who has an encyclopaedic memory, remembered me from our initial meeting.

I spent the remainder of the afternoon by the Congressman’s side, watching closely as he visited with anyone who approached while also making an earnest effort to actually fill backpacks (this alone set him apart). As the event drew to a close, the Congressman asked that I walk him to his car. I stopped short and inquired if he would be willing to say hello to the three boys who I had conspicuously abandoned at Rhoda’s behest.

I sprinted over to where the young men were still working and breathlessly asked them to accompany the Congressman. They appeared nervous, but as I reassured them, bright smiles broke across their faces. We caught up with the Congressman who locked eyes as he asked after their background and names, their hands clasped in his embrace. The Congressman then handed each of the boys a business card and asked that they schedule a meeting with him. The boys and I were touched but we thought nothing more of it. Upon learning of what had happened, however, Rhoda insisted that the Congressman was sincere, and tasked me with ensuring that the meeting took place.

The solemnity only deepened when the smallest of the three boys said, “I want to be like you when I grow up.” To which the Congressman replied, “We need you now.”

A few weeks later, the three boys, their parents and I arrived to Cannon House Office Building, where for the next sixty minutes, the Congressman regaled us with the story of his life’s work. The solemnity of the occasion was broken only by the Congressman’s quiet chuckles and sharp wit (including a story about how he would practice preaching to his family’s chickens as a child, a “captured audience”). The solemnity only deepened when the smallest of the three boys said, “I want to be like you when I grow up.” To which the Congressman replied, “We need you now.”

In a city where public service is a form of currency to be Tweeted and tallied, Congressman Lewis had little incentive to extend himself to those of us in his office that day. Those three boys were not from Georgia. They were not his constituents. They could not vote, and he would never see them again. I do not wish to enlarge the Congressman in death beyond what he was in life. But as powerful as he was in so many ways—in his conviction, his rhetoric, his moral courage—perhaps we could all do well to remember that he was powerful in his quietest moments, too. 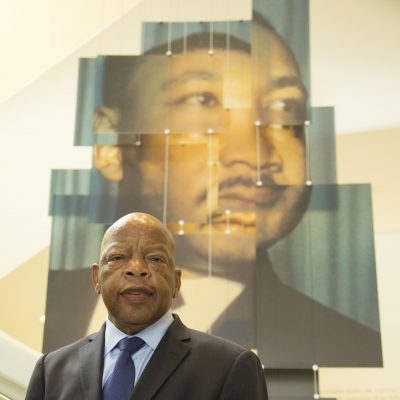 In 2011, Humanity in Action honored John Lewis at the home of dear friends in New York City. As always, he spoke eloquently about his background, values, and expectations. In memory of his strength, wisdom, and inspiration, we are pleased to share his remarks through this audio recording. 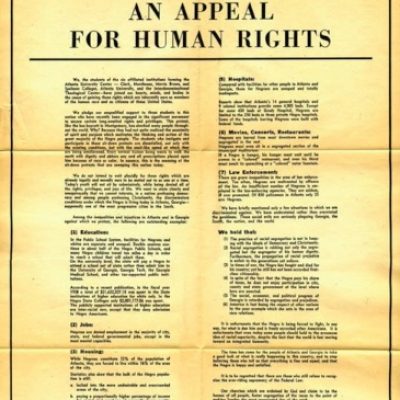