Q&A with Carol Anderson on Democracy, American History, and the Lessons We Can Learn From Antiquity

On September 27, the new documentary I, Too held its international premiere at the Athens Democracy Forum in Greece. Ahead of the premiere in Athens, How to Fix Democracy host Andrew Keen caught up with bestselling author and Emory professor Carol Anderson to discuss the lessons we can learn from Greek antiquity, the issues facing contemporary democracy, and how early Greek democracy influenced the American experiment.

You can listen to their full discussion bellow, which we have also published below as a Q&A. The written version of the interview has been edited for clarity.

Andrew Keen: One of our favorite guests on How to Fix Democracy – actually not one of our favorites, our favorite guest on How to Fix Democracy over the last few years is the Emory professor and bestselling writer Carol Anderson. And as it happens I’m here with Carol in Athens. Not Athens GA, but Athens, Greece. We’re here for the New York Times forum on democracy and we’re actually standing up outside the Acropolis. Carol, how does it feel to be in Greece to talk about democracy?

Carol Anderson: It feels so symbolic. We think of Greece as being the source of democracy, where the idea of democracy was being formulated and trying to be implemented; and given how we are in a crisis of democracy now, it feels just absolutely powerful to be in this space talking about how do we fix democracy, how do we save democracy.

AK: Carol, you can look out over the Acropolis with the sun in your eyes. Can we learn anything from antiquity in terms of contemporary democracy? Particularly in America, given antiquity’s notorious slavery and sexism and inequality? Is there anything we can learn from the ancients on democracy?

CA: No, I don’t think they misunderstood antiquity. I think that one of the things is that they were so involved and engaged in slavery and what that meant, that you saw when they were crafting the nation, when they were drafting the constitution, they didn’t even mention slavery because they knew that it was this horrible, horrific thing that was the antithesis of what they said that they were about. And you saw these deals being cut between the northern founders and the southern founders about how to create this incredible nation and still make slavery viable. You had an absolute antithesis sitting in the middle of the US Constitution, so this is how we get the Three-Fifths Clause that deals with representation in Congress by counting 3/5 of the slaves’ population, which then overinflated the power of the South and the slaveholders. This is how you get a 20-year extension on the Atlantic slave trade, and this is how you get the Fugitive Slave Clause, also embedded in the Constitution.

AK: You recently, at Emory, got a grant to imagine, or perhaps reimagine, democracy. In this trip to Greece, do you think this will help you imagine or reimagine democracy in America?

AK: Carol, we’re talking in the last days of September 2022. There is of course a very important election in America in the first week of November, in six weeks’ time. How critical do you think this election is?

CA: The 2022 election is a make-or-break election for democracy; and what I mean by that is that right now we have on the ballot a number of election deniers: those who backed the insurrection, and those who deny that Joe Biden won the presidency. And remember, in that struggle that led up to January 6th, you had a number of initiatives to overturn will of the voters, which is foundational to American democracy. The voters are foundational. And you have these folks who are going in there with their fake elector schemes: “if they would just call a special election and have the state legislature overturned,” “if you could just have your Secretary of State find 11,780 votes.” So you have this attempt using officials at the state level to overturn the will of the voters and therefore taint the Electoral College votes. We’ve got those folks right now on the ballot in the general election who have made it clear that they don’t believe that any election that they don’t win is a valid election.

That’s not democracy; and so if these folks win in 2022 they will be in place in 2024 with the presidential election to overturn whatever the will of the voters is. So that is why 2022 is so important. It’s also important because it deals with control of the US Senate, and with control of US Senate we would be able, if we got enough new Democratic senators, to push forward a voting rights protection act that would protect the right to vote and that would short circuit these schemes to overturn the will of the voters by having all of these fake elector things happening. So 2022 is so important because it’s going to determine who’s in place in 2024 in order to make sure that the vote is free and fair, and that all of the legal votes are counted.

AK: Final question for Carol in Athens, so let’s end on an opinion note. Of course, the fate of democracy in Athens was a tragic one and many of the philosophers, particularly Aristotle, focused on the way in which democracy can degenerate into oligarchy or aristocracy, or what Aristotle I think called ochlocracy – the rule of the mob. Can we learn from the Greeks about saving our democracy? 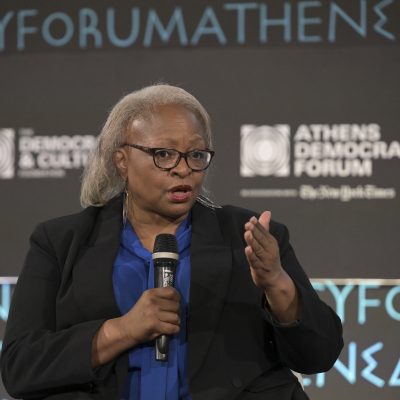 On September 27th, 2022, Humanity in Action, the Bertelsmann Foundation and the Democracy and Culture Foundation organized the screening of “I , Too” a documentary film from the mind of Carol Anderson. 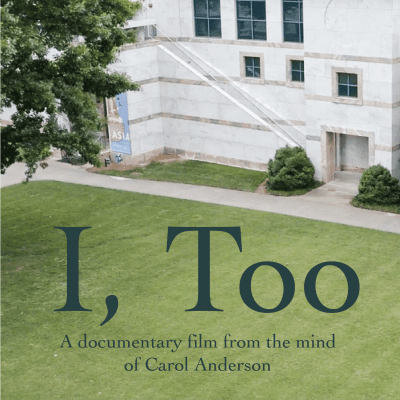