We are proud to announce that Humanity in Action Germany’s Honorary Chair Cornelia Schmalz-Jacobsen has been awarded the Federal Cross of Merit (in German: Verdienstkreuz 1. Klasse des Bundesverdienstordens der Bundesrepublik Deutschland). On Friday, October 30, 2020 the Senator for Culture and Europe for the State of Berlin, Dr. Klaus Lederer, presented Cornelia Schmalz-Jacobsen with this high award by the Federal Republic of Germany for services to the common good on behalf of President Frank-Walter Steinmeier.

During her time in politics, Cornelia Schmalz-Jacobsen was Senator of the City of Berlin’s Government, Secretary General of the Free Democratic Party, a member of the German Bundestag, and a Federal Commissioner working on issues concerning immigrants and refugees. She was explicitly honored for her tireless work in various non-profit organizations, including serving as chairwoman of Humanity in Action Germany for many years. As the press release by the Berlin Senate states:
“[…] as honorary chairwoman of Humanity in Action Germany she promotes democratic awareness and social diversity through international education and networking programs.” In addition, Cornelia Schmalz-Jacobsen’s constant commitment to keeping alive the memory of the victims of Nazism and the period after 1945 is also reflected in her literary work. The book Two Trees in Jerusalem deals with the memory of the persecuted Jews and tells the story of her parents who saved some hundred Jewish lives. Both were awarded a tree each in Yad Vashem’s Alley of the Righteous Among the Nations. Her latest book Russensommer reflects on how she spent the last years of World War II at the Baltic Sea and how she remembers the liberation from the NS regime by the Russian soldiers.

“Thank you for your remembrance work against forgetting and for your strong commitment to democracy and human rights.”

In his laudation Dr. Klaus Lederer remarked: “We are very lucky that there are people like Mrs. Schmalz-Jacobsen who are constantly working to bring the past and the future together. Thank you for your remembrance work against forgetting and for your strong commitment to democracy and human rights”. And more personally he added: “It is a special honor for me to present you, Mrs. Schmalz-Jacobsen, with the Federal Cross of Merit. You are an advocate for democracy whom I knew through the media before the fall of the Berlin Wall in 1989, but whom I never dreamt of meeting in person.”

We wholeheartedly congratulate Cornelia Schmalz-Jacobsen, our Honorary Chair, and look forward to many more years of strengthening democracy and transatlantic dialogue.

Read the Senate’s press releases (in German) here and on Facebook. 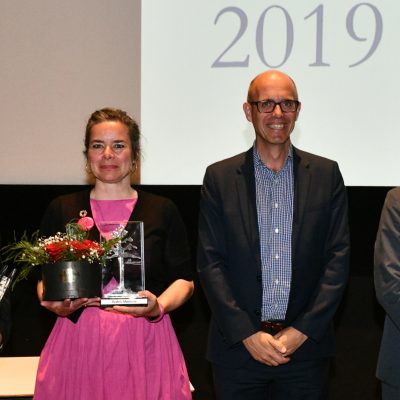 Humanity in Action Denmark was recognized with the prestigious Dialogue Award for 2019 by Forum of Dialogue.