In 2021 the Copenhagen Fellowship focused on the Unity of the Realm. Using a Human Rights lens we dove deep into the pressing realities of this often overlooked region, as well as Greenland’s, Faroe Island’s, and Denmark’s role in shaping it. During the Fellowship, we hosted several open events where the public was invited to discuss pressing issues with our Fellows.

All events tried to either untangle the complex issues related to the Unity of the Realm or look into current events, as well as understand what civic engagement and action means in 2021.

Refugees on Temporary Stay – Focus on Syrians in Denmark On August 14, 2021, founder and daily leader of Refugees Welcome, Michala Clante Bendixen, and Syrian refugee, activist and Humanity in Action Fellow, Nour Moazzen, drew a full house at Borups Højskole. Michala shared her work at Refugees Welcome and explained how the political decision to repatriate certain Syrian refugees affect the refugees, and what consequences this decisions might have in the short and long term. Nour shared her personal story of flight and rescue and how she works to increase awarenes of, and knowledge about, the situation of Syrians in Denmark and Syria.

Threats to Democracy in a post-covid world

On August 18, 2021, renowned TV anchor, editor and public speaker Clement Kjersgaard visited a full Borups Højskole to talk about current threaths to democracy. In light of recent events in Afghanistan – the Taliban takeover and the withdrawal of US forces – the debate quickly focused on an analysis of the consequences for Denmark, Afghanistan and Western democracies of these events. During the Copenhagen Pride Week, Nortatlantens Brygge (The North Atlantic House) and Humanity in Action Denmark co-organised the North Atlantic Rainbow Days. In a series of debates, lectures and film screenings, Fellows and audience discussed LGBTQIA+ rights and challenges in Greenland, the Faroe Islands, and Iceland and watched the documentary Eskimo Diva. 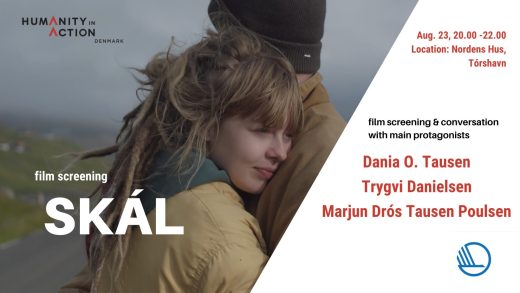 Upon visiting the Faroe Islands, Humanity in Action invited local Faroese, as well as all Fellows to watch the award winning documentary Skál at Nordens Hus in Tórshavn. The protagonists of the film were present to discuss their experience with and visions for the film with an attentive audience.

Thank you to the audience and especially the cast from Skál for an uplifting and enlightening evening.

While visiting Tórshavn, the capital of the Faroe Islands, Humanity in Action organised a panel debate with three young Faorese politicians, Steffan Klein Poulsen from the party Miðflokkurin, Hervør Pálsdóttir from the party Tjóðveldi, and Bjarni Kárason Petersen from Framókn. Each politician offered their perspectives on what they perceive as the most pressing issues Faroese society face today. It became an open and frank debate about abortion and transgender rights, independence, immigration, and the affect of the internet on Faroese youth.

Thank you to the audience for creating a lively debate, and especially thank you to the panelists for participating and to Faroese senior fellow Tór Marne Weihe for co-organising the debate and moderating it.