As of July 28th, there will be no more calls. No repeats of our rituals of transatlantic speaking. No formula of affection. I called from the States. He answered but he did not say hello. Simply: “Melchior,” was the first response. I immediately shot back “Goldstein.” Then the conversation began. “Goldstein……..ah,ah,ah,ah,ah, ah,ah,ah, ah, ah, ah, ah, ah, ah, Goldstein” and more ah’s. Then a modulated silence. It was absolutely clear to him that the voice on the other end wasn’t one of his beloved children, grandchildren, great grandchildren, other family members, and dear friends. The voice wasn’t that belonging to a distinguished fellow clergyman, politician, diplomat, journalist, editor, filmmaker, prime minister, actor, artist, actress, high government official—in Denmark, Israel, the United States, or Europe—, or member of the Jewish congregation and Muslim community. These were the voices he habitually heard seeking him out. They called for advice and guidance, to request a speaking engagement, write an article, give an opinion, schedule a classroom appearance, provide a religious interpretation, appear in a church, support a cultural event, mediate between contesting parties, officiate at a wedding celebration, or speak at a funeral.

Few people could transverse through voice, language, and posture as well as he, the passages from humility to power, from modesty to authority, from negotiations to certainty, from the small and petty parts of life to the majestic commitment to justice and belief. And what did they seek from Bent? A multitude of qualities that they knew he would deliver: wisdom, moral bearings, eloquence, dignity, humor, insights, courage, memory and knowledge on so many subjects. He was a brilliant speaker at major events; the 50th anniversary of the Rescue of Jews in Denmark; the 75th anniversary of the Rescue celebrated at the Danish Opera House in the presence of the Queen; narrator of Voice in the Void about his family’s escape in 1943. At celebration after celebration, memorial after memorial, enquiry after enquiry, and historical retellings, he provided connections among our traditions—national and religious—and our present lives.

He spoke for Denmark at its best but dared to criticize his country when it reneged on its best intentions. He spoke for the Jewish community in Denmark when it was struggling to sustain itself with diminished numbers and stability. He spoke for Jews in the Soviet Union when they were imprisoned in a culture of hatred, oppression and presumed oblivion. He spoke for Israel when its existence was threatened (in 1948, 1967, and 1972) and for Jews and non-Jews who held the country accountable for oppressing its non-Jewish populations. He spoke for immigrants and Muslims, in particular, those who want to be Danish but find their presence questioned and questionable.

And he spoke for wisdom, knowledge, observance, and commandments that passed through Jewish generation after generation. He skillfully negotiated the transformation of Orthodox Judaism into the modern world, the emigration of much of the Danish Jewish community to Israel, the presence of Jews in a Christian community, and the ever-growing resistance of Danes to Jewish and Muslim religious practices. He never gave in to changes that he thought were wrong or to prejudices that he thought threatened Danish democracy and culture.

Bent was a brilliant raconteur and story-teller—a quintessential observer of the follies of human beings. Few people could transverse through voice, language and posture, as well as he, the passages from humility to power, from modesty to authority, from negotiations to certainty, from the small and petty parts of life to the majestic commitment to justice and belief.

At the end of his life, he was ready to let it be. His beloved Liliane had passed several years before. He admitted that he felt sorry for himself because she was no longer with him in person. He couldn’t visit Israel and his family in Israel who travel to Denmark because of Covid. His legs gave way, his mobility impaired, his car couldn’t be of use to move around. His energy ebbed, but never his dignity or faith.

In each of our calls, starting with Bent’s “Goldstein…..ah, ah, ah, ah, ah…,” Bent’s tone was initially filled with warm surprise and curiosity. Ah! What do you have in mind? He waited for clear intentions and direction. So why are you calling, he implied? In truth, the calls were for a multitude of reasons: seeking guidance, the enrichment and warmth of friendship, the pleasures of his marvelous humor, the benediction of holiday wishes, the fruits of his knowledge about history and culture, guidance on Israel and an imperiled America—and the certainty that Humanity in Action continued to meet his expectation. In truth, the calls were to relish or imbibe his attention and guidance.

One rarely meets people of great stature and meaning. Bent’s presence was a blessing for so many, especially in Denmark. One feels gratitude to have known him, deepest sadness at his passing and resolution in honoring his greatness of character and beliefs. 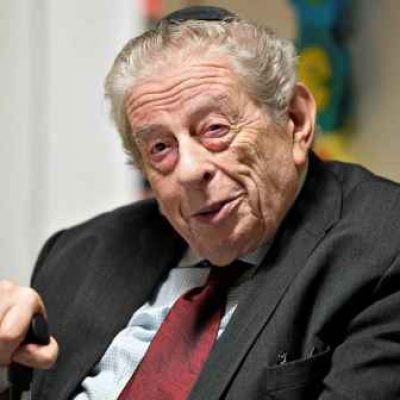 Invitation: Civil Engagement Across Time and Age - A Conversation With Bent Melchior 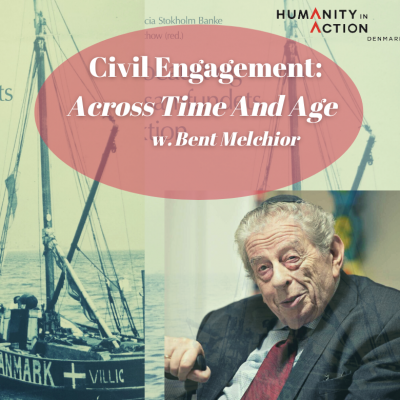